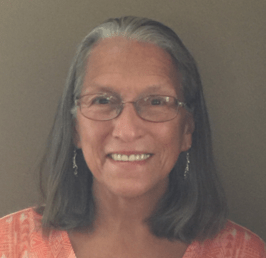 It is with great sadness that the National Alaska Native American Indian Nurses Association (NANAINA) announce that our friend, colleague, and long-term Board Member Mike Snesrud has ended her journey on earth and passed to the spirit world on March 18, 2021. Mike was a retired CAPT U.S. Public Health Service, a Registered Nurse, BSN, and Certified Public Health Nurse. She had 35 years of nursing experience, primarily in public health administration with over 29 years of experience working with Indian Health Service (IHS), Centers for Disease Control and Prevention (CDC), and tribal health programs. She had a distinguished record of effective leadership working with Tribal Communities and Tribal Governments, local, state, regional, and national public health programs and agencies.

Mike began her nursing career in 1974 after graduating from Winona State University in MN. She spent a few years as a public health nurse in MN and KS, a clinical surgical nurse and as a clinical instructor for Haskell College nursing program. In 1982, she returned to Minnesota and was hired by Fond du Lac Band of Lake Superior Chippewa as Director of Public Health Nursing. Over the years, Mike grew the program from a staff of 8 to 48 with the majority of whom were native. Under her leadership, prenatal visits increased, childhood immunizations improved, and trust and acceptance were enhanced among the local community and public health staff.

Mike was an active member of NANAINA from the start. In 1993, she was a founding member of the newly re-organized nursing organization (formerly called American Indian Nurses Association); became its first president, later chaired the membership committee and was a long-term treasurer. During her leadership years with Fond du Lac, she chaired the IHS National Council of Nurse Administrators (NCONA) and represented tribal public health nurses on the National Council of Nurses (NCON). Additionally, Mike served on the Board of the American Indian Cancer Foundation.

In 2001, Mike joined the CDC as Senior Tribal Liaison for Policy and Evaluation in the Office of the Associate Director for Minority Health. She served as a liaison with tribal nations and partnered with the IHS to formulate a tribal consultation policy for the CDC. At the time, the Secretary of DHHS had asked federal agencies to develop tribal consultation policy to improve relationships with tribal nations and to improve tribal health status. Another project that Mike oversaw was a five-year CDC cooperative agreement with the American Indian Higher Education Consortium (AIHEC) to assist tribal colleges in increasing the number of native students in the health professions, especially in public health.

We will greatly miss Mike’s bright smile, abundant energy and delightful laugh, her keen understanding, and strong support of Native American nursing. Mike was a strong and courageous advocate for Native Americans throughout her life with innate courage to speak truth to power in whatever setting she found herself. She deeply desired NANAINA to support Native American nursing students and encouraged the Board often to reach out to new students to promote opportunities for their involvement in the organization by creating ways to join with ease, knowing they had busy lives.

At the 2018 NANAINA annual meeting and conference in St. Paul, MN, Mike assisted in the many logistical details of convening a large conference by assisting attendees with housing questions, walking attendees to their rooms, assisting with registrations, assisting the masters of ceremonies, and always a support to the board as a historian on a wide variety of topics. Wherever NANAINA needed help, Mike was there. We praise and thank Mike for her leadership at all levels where she made a positive impact to lessen health disparities and to elevate American Indian and Alaska Native health.

We wish her family and loved ones peace and strength at this time. Mike will always be remembered as a valued member to the success of NANAINA.